The film was shortlisted for the young director project unit of SIFF PROJECT at the 24th Shanghai International Film Festival·(SIFF) in 2021. In the poster released for the first time, the three main performers, having drinks, were in different states, reproducing the "sweet yet dangerous" atmosphere of this "romance-scam" female revenge work. 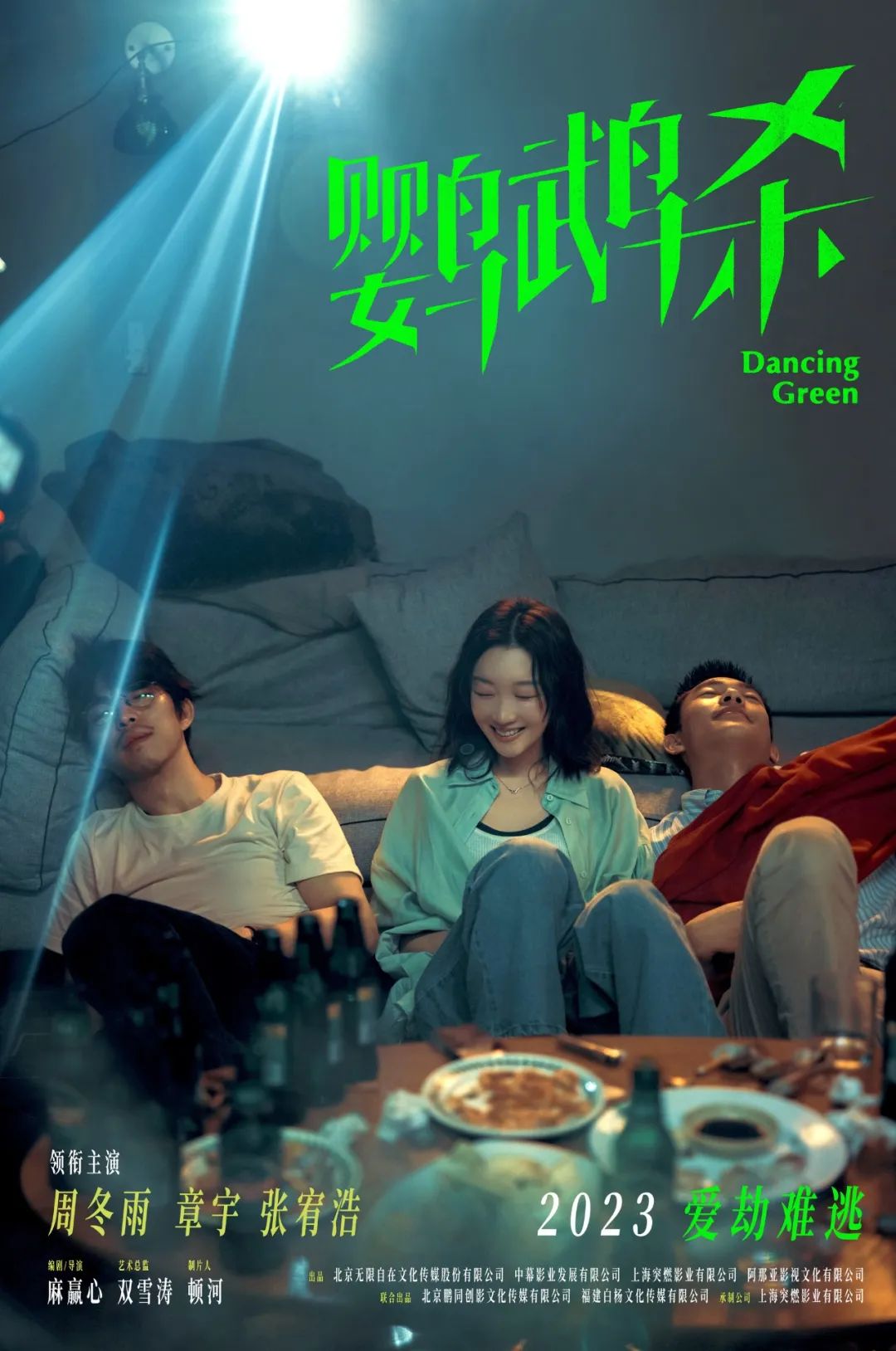 The first poster reveals the modeling of the three main performers, which is quite different from their previous profiles. Zhou Ran, played by Zhou Dongyu, has shawl, wavy medium-length hair, and a shirt with a tube top vest, which is her first interpretation of an intellectual and mature woman. Zhang Yu, who created the image of a man of iron in SNIPERS, puts on glasses and gets a beard for the role of Lin Zhiguang, showing a hidden and charming temperament; while Zhang Youhao, who acts Xu Zhao, takes on a tough style with more unruly wildness behind his dashing look. The three performers have made a big breakthrough compared to their previous screen images, fulling people with the curiosity about what new sparks will be produced between them.

The film DANCING GREEN takes inspiration from the real-world "romance-scam" news and tells the story of Zhou Ran (Zhou Dongyu), who tries to find someone in a small town in Fujian after being cheated. Through a parrot, she accidentally meets Lin Zhiguang (Zhang Yu) and Xu Zhao (Zhang Youhao) and gradually finds out that they are related to her past experience of being scammed. In the poster just released, the swaying light indicates uncertainty, and Zhou Dongyu, Zhang Yu, and Zhang Youhao, slightly drunk, lean against the sofa with their eyes closed. The empty wine bottles in front of the table seem to tell the end of a party. And Zhou Dongyu, in the center of the frame, has a meaningful smile on her face. Zhou Ran, who is originally the victim of the scam, seems to have become the one organizing the party. What kind of complexity and subtlety will there be between the three of them? And the complex and subtle emotional relationships between the three are exactly the suspense for one to uncover in this film step by step. 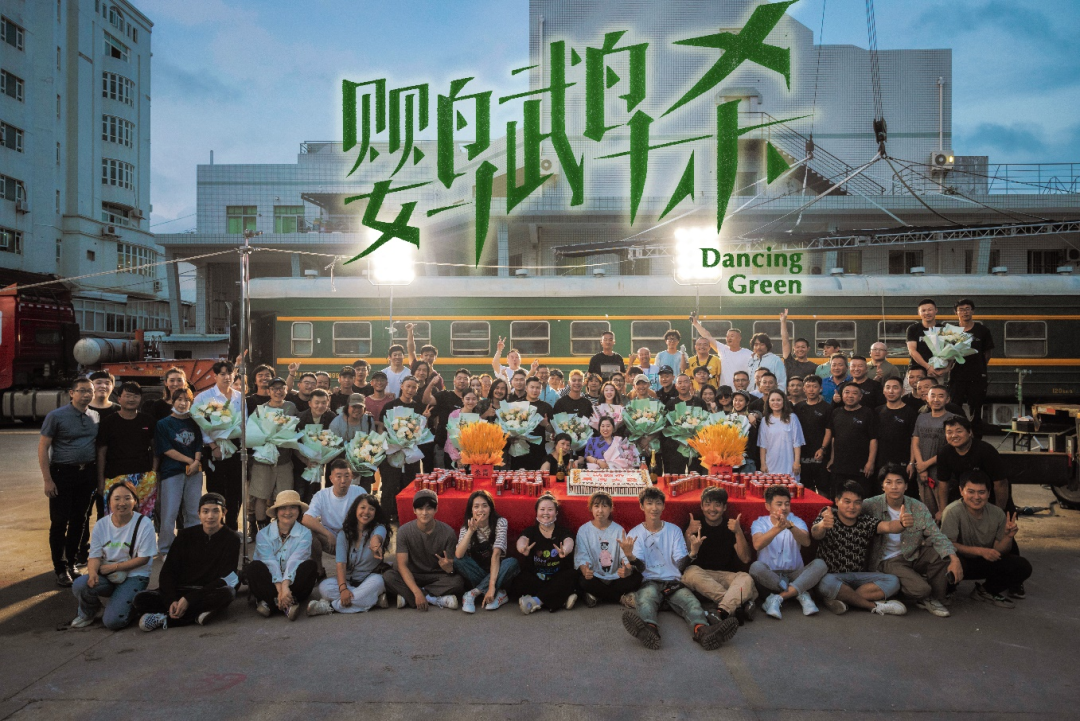 Group photo of DANCING GREEN upon the end of filming

The film DANCING GREEN is written and directed by director Ma Yingxin. Ma Yingxin graduated from the University Carlos III of Madrid, Spain, with a master's degree. In 2014, she wrote and directed the 25-minute independent short film UNA MUERTE ANUNCIADA, and in the same year, she founded the production company MYX FILM PRODUCTIONS. She once talked about the original aspiration of creating the film, "I am very concerned about how these women being scammed face huge lies and harm." And this is the start of the story of this film. After being deceived, the heroine Zhou Ran is still obsessed with whether the past is true or not. She comes to the hometown of the "lover", and while looking for the truth of the deception, she has a romantic battle with two mysterious men. Among the films with the theme of "romance-scam", DANCING GREEN is quite unique, which, starting from the revenge of women, brings together elements of love and suspense, making the audience full of fear and curiosity about the "truth".

"Currently, the state is committed to combating online fraud crimes. As a leading company in the industry, we believe that this film is not only a purely commercial project, but also a warning to the audience." Producer Zhu Weijie said. He noted that value output on hot social topics is the original intention of investing in this film, and he was also full of confidence in the market performance of DANCING GREEN, "Films of the love suspense genre always outperform in the market. As for this kind of dangerous yet sweet romantic revenge, I believe the performers will present it in a wonderful way, so this is a very valuable work from both a commercial and social point of view." 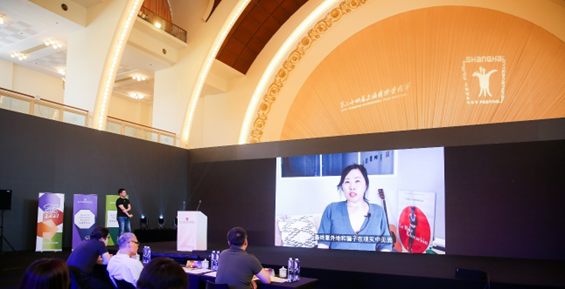 Director of DANCING GREEN Ma Yingxin (in the video)

With producer Dun He (left of the podium)

"The calm narrative tells an unspeakable past. The story has created several typical characters as well as an atmosphere of detachment, which is artistically original." In 2021, DANCING GREEN was shortlisted for the youth director project unit of SIFF PROJECT at the 24th SIFF, and the jury at that time expressed full expectations for it. In June, director Ma Yingxin, who was far abroad, shared the story with everyone at the event site of SIFF PROJECT through a video. The film's art director Shuang Xuetao and producer Dun He came to the event site and participated in the public presentation and negotiation of the project. The two are old friends of SIFF. The artistic director Shuang Xuetao once served as the annual recommender of SIFF PROJECT for the 23rd SIFF in 2020, and the producer Dun He once instructed as a mentor in SIFF NEXT phase II at SIFF in 2020. 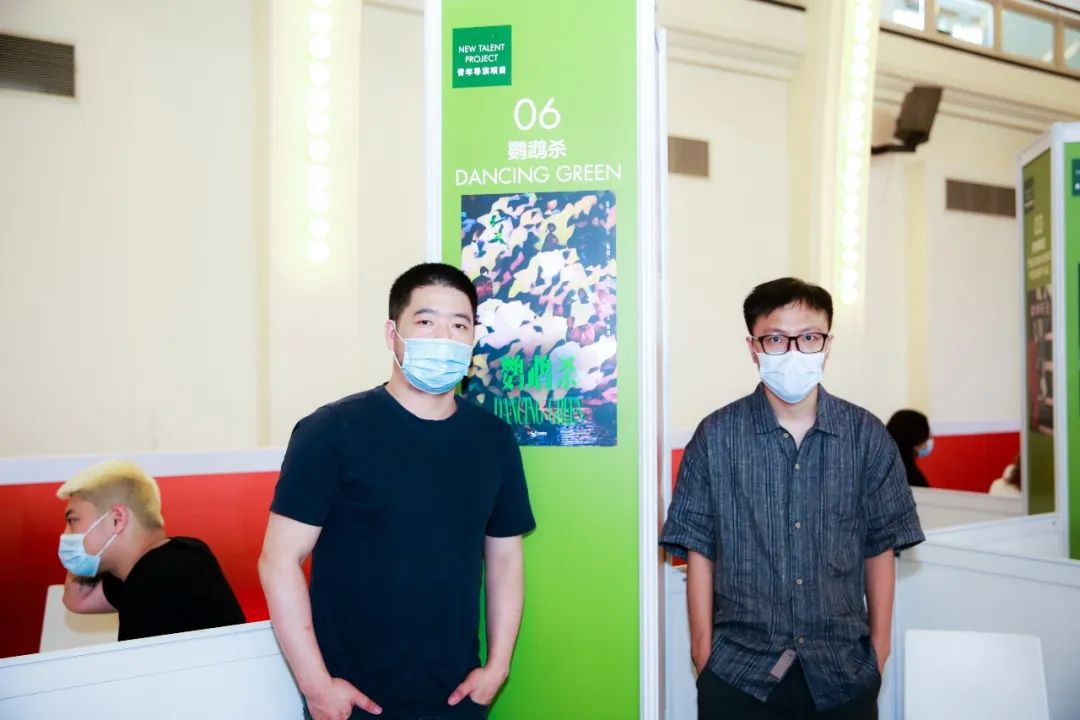