In June 2018, during Shanghai International Film Festival (SIFF), 31 film festivals and film institutions from 29 countries around the world, including Tallinn Black Nights Film Festival (PÖFF) from Estonia, signed to set up the Belt and Road Film Festival Alliance. To enhance the mutual understanding among the alliance members and promote film cooperation across countries, SIFF jointly organized the industry forum on the theme of "Sino-European Film Co-production: Fad or future" with PÖFF in Estonia for the first time, which attracted wide attention from the European film industry. At the same time, the film ALA CHANGSO was screened and introduced for appreciation in Tallinn, making it an important stop for this year's Belt and Road Film Tour.

On the afternoon of November 28 (local time, Tallinn), the “Sino-European Film Co-production” theme forum organized by SIFF was held at the Nordic Hotel Forum as part of the Industry@Tallinn & Baltic Event. Mr. YANG Jinsong, screenplay coordinator of YOUTH, co-producer of ASH IS PUREST WHITE, and film critic, Ms. SONG Yiran, purchasing director of Shidai Huaying Media (Beijing) Co., Ltd. and Ms. Kati Nuora, head of the Sino-Finland Bigger Picture Project and other guest talked in depth about how could Chinese and European film makers cooperate effectively in terms of production and distribution. Marge Liiske, director of PÖFF Industry Events, and Rolandas Kvietkauskas, director of the Lithuanian Film Center, attended the forum.

“Co-production” is a topic often mentioned by Chinese and European filmmakers, but there is a difference in the definition and understanding of “co-produced films” between them: For European filmmakers, any investment of Europe’s capital or technology can be deemed as co-production, while the Chinese-defined co-production has to meet a number of quantifiable criteria such as the investment ratio, the nationality structure of the cast, and the status of copyright holdings. This forum first introduced the “co-production” category, norms, operation modes and related policies in the Chinese definition to European audiences, and then carried out an in-depth dialogue on how to develop broader and diversified cooperation models.

Taking PERFECT STRANGER, THE INVISIBLE GUEST and other European films popular in china in recent years as examples, YANG Jinsong analyzed the changes in the demand of Chinese audiences from the perspective of creation; and through the production and distribution cases of WOLF TOTEM, ASH IS PUREST WHITE, etc., he elaborated on how the participation of European film companies in capital and technology has influenced Chinese art films’ international distribution and publicity at festivals.

SONG Yiran shared her considerations and strategies for selecting, purchasing, and distributing European films based on her experiences in co-produced films and film import from Africa and America. She also pointed out the impact of the rise of China's network screening and distribution platforms on imported African and American films, and offered advices on issues concerned by European film makers, such as how to choose Chinese distribution channels.

SONG Yiran, purchasing director of Shidai Huaying Media (Beijing) Co., Ltd.
Kati Nuora told from a platform perspective how she incubated and supported the Sino-Finland film project. Since the signing of the co-production agreement between China and the first European country, China’s growing box office volume, the improvement of the Chinese audience’s watching interest, and the development of the film-watching platforms had instilled the Chinese and European film makers present with confidence in the cooperation between the two sides as well as the future of co-produced works. 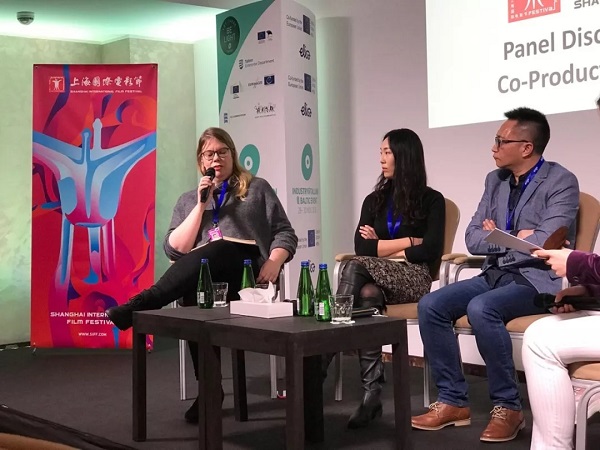 Kati Nuora, head of the Sino-Finland Bigger Picture Project
The event, with all seats occupied, met with enthusiastic audiences sharing their ideas. The Israeli filmmaker Merav Ktorza currently has a completed film that is being shown at PÖFF. She has expressed her expectation of the performance of art films in the Chinese film market. Alessandro Raja, founder of Festival Scope, a well-known art film online information platform, believes that Chinese art films should be appreciated by more Western audiences, which will drive the exchange and cooperation between Eastern and Western cultures. 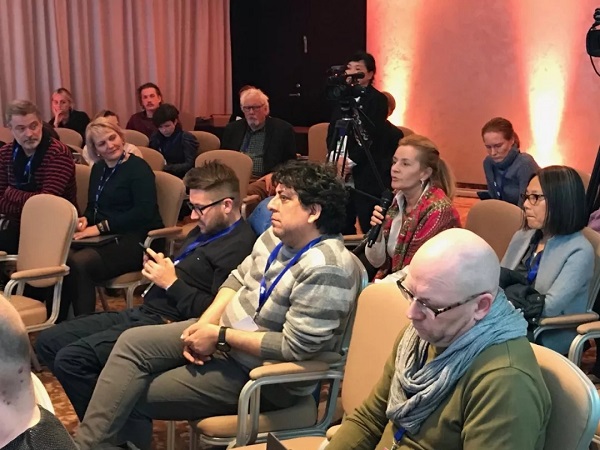 The Israeli filmmaker Merav Ktorza
Started in 1997, the Tallinn Black Nights Film Festival (PÖFF for short), holds the FIAPF accreditation for the so- called A-category of film festivals, and has risen to be one of the biggest and well-known film festivals in Northeast Europe. The Industry@Tallinn & Baltic Event during the Festival is also an important chance for film industry professionals -producers, filmmakers, financiers, film festivals and film institution managers – to gather, attracting nearly 1,000 industry guests every year.