In order to promote the cultural exchanges between China and Japan, the Sino-Japanese New Production Exhibition jointly organized by Shanghai International Film Festival Center, UNIJAPAN and the Japan Foundation is counting down its second half –Chinese Film Festival 2018. From March 8 to 14, ten Chinese films are to be screened in Tokyo, Osaka, and Nagoya, Japan. As the opening film of Chinese Film Festival 2018, YOUTH, a work of FENG Xiaogang, was first released in Tokyo today (March 8).

Last December, as the first half of Sino-Japanese New Production Exhibition, Chinese Film Festival 2018 was successfully held in Shanghai, Shenzhen, and Kunming. A BEAUTIFUL STAR director Daihachi YOSHIDA and leading actress Ai HASHIMOTO, IMPOSSIBILITY DEFENSE director Kōji SHIRAISHI, LEAR ON THE SHORE director Masahiro KOBAYASHI and THE ANTHEM OF THE HEART director Naoto KUMAZAWA, among other Japanese cast guests, showed up at the after-show events to meet with Chinese viewers.

The 10 domestic films on the screening list of Chinese Film Festival 2018 are all carefully-selected new works produced by Chinese filmmakers: YOUTH, a story about the youthful days of a group of idealistic adolescents in a military art troupe, leads the audience to the exciting past; directed and written by HAN Han, DUCKWEED tells the story about the reconciliation between a father and his son through creative depiction and perspectives; ASH, directed by LI Xiaofeng, was 2010 SIFF Project, as well as the nominee for the A Window on Asian Cinema section at the 22nd Busan International Film Festival; the fantasy movie THE THOUSAND FACES OF DUNJIA produced by TSUI Hark and directed by YUEN Woo-ping features exquisite effects and sharp action, must be a feast for the eyes; the young director XIN Yukun’s work VILLAIN/ WRATH OF SILENCE depicts the coldness and warmth in reality through a miner father’s tracing of his young son; Pengfei’s THE TASTE OF RICE FLOWER presents the kinship between mother and daughter in a humorous camera language; THE ONE, by LU Zhengyu and TILL THE END OF THE WORLD, by WU Youyin are both outstanding works with unique styles; based on the novel by Higashino KEIGO, the movie  MIRACLES OF THE NAMIYA GENERAL STORE comes back to Japan in a new look. It is worth mentioning that among them, DUCKWEED, CITY OF ROCK, VILLAIN/ WRATH OF SILENCE, THE TASTE OF RICE FLOWER and TILL THE END OF THE WORLD are all films produced in Shanghai.

Today (March 8) afternoon, the opening film YOUTH was screened at the TOHO Cinemas in Roppongi Hills, Tokyo. At the launching ceremony of the Chinese Film Festival 2018 held after the screening, the Chinese ambassador to Japan, CHENG Yonghua, said in his speech: “For all the 10 Chinese films selected, they are honored to make their premiere in Japan through the event. Among these excellent movies of different genres and themes, there is YOUTH, which has achieved box office of over RMB 100 million in China, and TILL THE END OF THE WORLD, which is now on public release at home. I believe that through these outstanding works, you will encounter a colorful, vibrant, and positive China.” Yasutoshi NISHIMURA, Deputy Chief Cabinet Secretary of Japan, stated in his address that Japan and China has reached general consensus on the outline of the Japan-China Film Co-Production Agreement last year. In the future, the film culture exchanges between China and Japan will increase gradually, which is of great significance to enhancing the friendship between the two countries. On behalf of the Organizers, President of the Japan Foundation Hiroyasu ANDO and Assistant General Manager of the Shanghai International Film Festival Center Kane YU, also made speeches at the ceremony, both hoping to facilitate the further exchanges and cooperation between China and Japan through the panoramas on occasions other than the Shanghai International Film Festival (SIFF) and Tokyo International Film Festival (TIFF).

Today, Tokyo was chilly and rainy, but the opening ceremony was still crowded with Japanese fans who came to watch YOUTH. The director FENG Xiaogang was unable to come to the scene for attending the “Two Sessions” in China. However, he specially recorded a congratulatory video in advance, in which he thanked SIFF for bringing his work to the Japanese audience, and wished the Chinese Film Festival 2018 a complete success. Director and leading actor of CITY OF ROCK DONG Chengpeng, who also starred in THE THOUSAND FACES OF DUNJIA, director of VILLAIN/ WRATH OF SILENCE XIN Yukun, together with its producer WEN Suchun, were present. 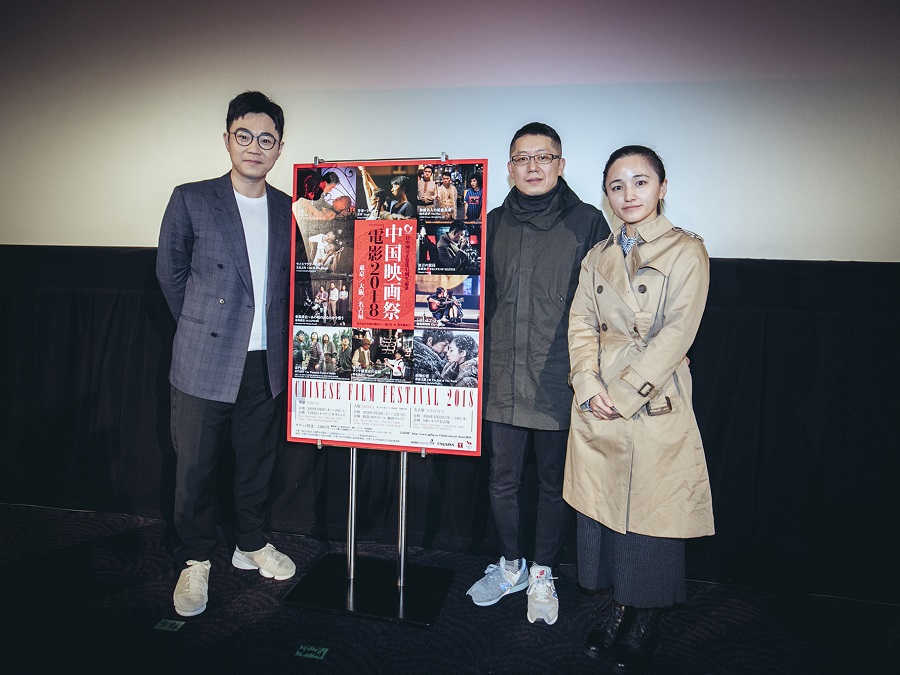 Da Peng、Xin Yukun and Wen Suchun on the opening ceremony

ASH director LI Xiaofeng and leading actor XIN Peng will meet with fans at the after-screening event in Osaka on March 10.

Since 2015 when SIFF and TIFF established the World Express cooperation mechanism, the two sides have built up a bridge for film culture exchange between China and Japan through approaches such as mutual recommendation for competition, filmmaker participation, and film promotion. The Sino-Japan New Production Exhibition, jointly organized by SIFF’s standing body –Shanghai International Film &Festival Center, TIFF’s Organizer –UNIJAPAN, and the Japan Foundation, is another innovative cooperation model following the World Express.